Your Grandmother Says Goodbye and Steps Away by Chimee Adioha 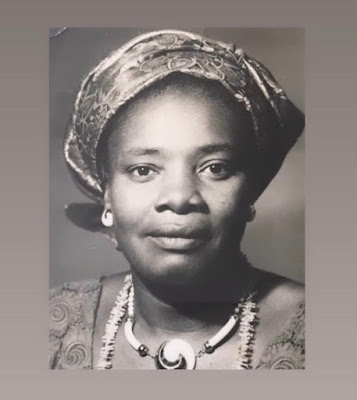 She translates you into a meaning.

She prays that you will be better than the life she has lived.

She summons the almighty to your advantage.

She says the rosary and infuses your name into the end of each mystery.

She lives so that you will smile.”

I watch her pose for photographs in 2010, at my parent’s wedding anniversary. My mother wears a small wedding gown to church and while she sees my mother, she beams with smiles.

Her name was Nnete or mama ejima. She liked to talk in that manner that you see an overflow of grass root philosophy; a festival of sense and wisdom that comes with grandmothers.

The last time I seen her is 2018; in a bedroom that smelled half like a pharmacy store and half like a box of old wrappers simmered in camphor and we sat on a bed that took half of the space of the entire bedroom. The half current from the yellow bulbs sprinkled shadows of many things- including us, her small body and white hair, my lean figure in an over-sized T shirt. A leather bag hanging beside the naked wardrobe.

She walks with an organized limp, with a blurred eyesight, with a calculated movement, with an articulate speech method, body curving inwards. She sits. Stands again. Tells me to help her with the leather bag. Tells me to return the bag. Tells me to get my phone and try a phone number she had off heart. Many phone numbers reside in her head and she vents them without thinking a second time. Always correct phone lines I may not have the capacity to store in my head.

We have come for a funeral of another distant relative who was beautiful and tall like a tall glass of wine. She was old and died. Grandmother says she is sad to see her leave so soon, although she was old. But she says it’s sad to remember all her struggles in this earth and just see her leave; but then her consolation was that she was old, and it was a good thing to die old. Her voice thickens with uncertainties.

In that bedroom, she sees death as a visitor who comes to grab us to follow them, one by one, whenever they come – but it’s important that they come when we are ripe, she says.

Now we are done with the phone call. She is angry at her nurse or someone close to her for not dropping a particular information to her the previous day. This would affect her plans the next day. She stands, leads herself to the rest room, shouts the name of her grandchild, and when he answers, she reprimands him for keeping a bucket at the corridor. The boy runs to her, asks for forgiveness, and takes the bucket away immediately.

She comes back to me, talks about Lagos when I tell her that’s where I live now. She begins a Lagos story; about the overpopulation, about security, about corruption- and how she feels the hope for Nigeria is a fairy-tale. She tells me to turn down the volume of the noisy radio beside the bed. The connection is now lost. It’s been struggling with a broken antennae. She tells me how she feels this is the time that we can work, use our energy, work and work. Do 3 jobs at a time if we can so we do not get old and regret.

“I never liked Lagos. It gives you money and takes that same money from you, eziokwu ” She says.

“You are correct. There’s something Lagos does to your money.” I laugh. We release heavy smiles at the same time.

She calls her grandchild again, my younger cousin, to help her spread the woolly sweater she plans to wear to the funeral the next day. She wants him to put it in a hanger and keep at the door. Every single thing she says fall out from her mouth as though she had rehearsed it before throwing them out. She looks at me again, the half current is better now. I can see her forehead, not wrinkled, smooth as the skin of a guava tree, but not slippery. Her color is a shade of brown from the half current bulbs. The shadows are now gone.

I want to sleep. But I do not still want to leave the bedroom. I want to sleep in the bedroom or hear her talk about many things until I switch to sleep. In the middle of our conversation, her Nokia phone rings. She reaches to it. I help her pick it. The line cuts. She gets angry and laments oh how a complete human being or a complete adult would call an old woman like her in the middle of the night and shamelessly has no money to fill up their airtime recharge.

I leave the bedroom and go to sleep. I greet her the next morning, while the birds were chirp-hooting and a dog was barking after two compounds next to our bungalow. She greets me back, heading to the rest room. I enter the same rest room when she is done. At the funeral later that morning, I see her and walk to welcome her. A group of women surround her. They also leave after a few minutes when I arrive. Her legs are covered in thick black socks and sandals. Hair covered with a uniformed scarf with cotton tails that ran down her shoulders. The rosary beads that crumpled in her open purse were thick, more than twenty five decades or something closer to the ones reverend sisters tuck at their belts.

She holds a fancy bag, then takes it by the side when I greet her. She touches me. Her catholic uniform is a thick blue wrapper with images of the blessed Virgin Mary and the holy child Jesus. Her blouse is a white chiffon. She stays sad. The late woman was her friend and she just sits, remembering all the encounter she had with her. She also consoles herself with the velocity of preparedness and organization that she sees at the funeral. She talks about death in a way that it is gift to every man and every woman.

And in the beginning of April, in the middle of the COVID-19 pandemic scare mongering, grandmother dies while in her son’s UK apartment. The video collection my uncle makes about her is a reflection of her life and all the photos she took with everyone. The photo slides of her -zoom out and zoom in as though she were not dead yet- the same way she seemed laid face up in the private mortuary; covered in a dark blanket from toes to neck; her face, like a younger her, glory in white hair.

The dirge my uncle had commissioned in memory of her is out last weekend and I never seen or felt so emotional at a funeral music. The voice in the music glares her life, mirrors the tiny memories we shared in her bedroom at my maternal home in April of 2018. From the songs in the dirge, I feel more, remember and think more, learn more, I also imagine an archive of memories that I have left unnoticed. The dirge has triggered this writing.

Prev10 Queer Books to Read this Pride Month
NextMy body protests through its poetry: An Afternoon Conversation with Adedayo Agarau
Prev
Next
you may also like