53 Years After the Nigeria-Biafra War: Young People Share Their Stories in One Video 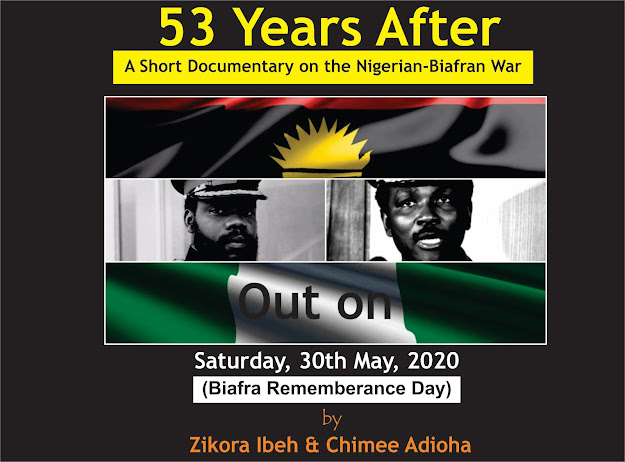 CLICK TO WATCH VIDEO: 53 YEARS AFTER; DOCUMENTARY &  STORYTELLING
This is a text from a conversation between BLACK BOY REVIEW’s Zikora Ibeh and Chief Ginger Egwuatu – who has worked as a Red Cross official during the war- and who is Ikemba Odumegwu Ojukwu’s cousin.
He says:
“I was in Lagos when Ojukwu announced the secession.
As soon as I heard that we had been pronounced the Independent Republic of Biafra, I hurriedly packed my personal effects and headed down for the East.
Two proverbs resonated the mood of the time for many Igbos – ukpana no okpoko gburu nti chi ya and onye ndi ro gbara gburugburu ne chenduya nche.
Loosely translated both statements meant ‘the fly that refused to listen follows the dead body into the grave and a person surrounded by enemies is always on guard and treads with caution.
The talk of war had been on for a while so it was no surprise that roars of excitement and applause from Igbos all over the country greeted Ojukwu’s announcement on the radio on May 30th 1967.
The reason for this was the unbelievable massacre of many Igbos resident in northern Nigeria.
Women, men, children were getting butchered every day.  Even pregnant women had their bellies torn apart and the babies in their wombs brought out and throats slitted.
Everyday, we continued to receive trailers loaded with dead bodies and dismembered bodies of our people who had managed to escape the beastly pogrom for home
It was a terrible situation that stemmed from a counter coup that snatched power from Aguiyi Ironsi on July 29 1966, killing him alongside 33 officers of Eastern Origin.
The understanding behind the counter coup was that Igbos planned to dominate and colonise the north with the coup of January 1966, even though this wasn’t  the case.
This rematch coup heralded series of riots in the north where the irreprehensible massacre of Igbos reigned supreme without check until our people got tired and put pressure on Ojukwu to declare a secession to halt the raging tragedy of hate and bestiality against us.
The then students of the University of Nigeria Nsukka coordinated demonstrations and intellectual debates that condemned the indifferent disposition of the FG on the targeted killings of easterners.
We entered the Nigerian Civil war with our Morale high. I wasn’t a combatant but I formed a large RedCross Unit in Anambra State knowing that the war was going to be tough.
Ojukwu had warned everyone ahead about being prepared for the outcomes of the war. Every now and then he would get on radio to acknowledge the evils of war but also point out that we had been left with no option because of the continued injustice and callousness against us.
The war lasted for thirty months. Thirty months of well calculaterd attempt to annihilate us.
It was a bloodbath of incomprehensible proportions yet for a major part of the wartime we held our ground.
We were no match for the Nigerian Army with its armoury, human resources, evil scheming and international allies yet our people soldiered on in reckless bravery.
Our intellectuals fed the populace with words of optimism to keep spirits high.
Our engineers revved up energy in the battlefield – the Ogbunigwe, a homemade war weapon we built was one of our greatest pride in the war fought.
It was a testimony of the many things we felt we could achieve if our new nation was actualized. Biafra was the new world of progress we were determined would happen regardless of the unfortunate odds against us.
The things I saw as a Redcrosser still leaves me in chills. At the height of the war when Nigeria activated the evil blockade of food and ultimate starvation of millions of civilians, I saw women throw away babies in struggle to survive.
You should have seen children skeletons of the war. Starved of food and shelter, children suffered kwashiokor and terrible circimstances.
By the tail end of 1969, our soldiers were dying on their feet not from bullets but from starvation orchestrated by the enemy camp.
Looking back now, I still ask again, what lessons have Nigeria learnt from the war?
The Nigerian civil war happened because of the failure of past leadership to secure quality life for all ethnic groups in the contraption.
53 years later, we are still mourning our loss, we have refused to right the wrongs of the past, just like Biafra, Southern Kaduna killings is an ongoing pogrom of christains in the North.
Today we are stuck in the rut of an even more corrupt and bigoted society”
Share this article:

PrevQuarantine Book Chat – Engaging Authors, Readers, and Literary Bloggers in the Time of a Pandemic
NextNotes on Paradoxical Continuities in Singularity by Ikenna Ugwu
Prev
Next
you may also like