A Rebel Finding Shelter in a Book Club 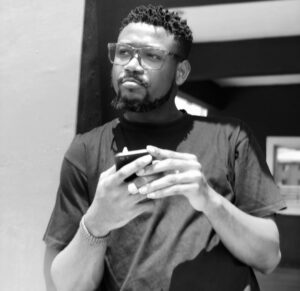 Text by: Glory Nwangwa
Mark Anthony Obumneme Osuchukwu is this rugged soul who is the outright definition of a rebel.  A young man who questions everything and is willing to champion causes that work towards re-exposing the Igbo culture. When you meet him, what comes to your mind is simply; ‘This beautiful boy’, at least until he begins to speak to you.

Our generation sometimes is full of young people who are confused and have lost any sense of themselves and so it is refreshing to get to meet someone who is fully aware of who they are and is using this knowledge to change the mind of others, challenging them to do better. Mark Anthony’s radical nature is beautiful to behold and how much he shows off his radical nature makes you realize that like many Nigerians would say, ‘Him no send’.

On the first day I met him, I remember saying to myself things about how much his life has undergone change and how much we need more people like him, who are very much self aware and know that they have super powers that the world should get to see. This made me elated when a few weeks later, he told me about wanting to start a book club. I knew that finally, something amazing was about to unfold, his voice was going to influence many other young people, his rebellion was about to spread to other minds. The book club would be called Eagle Nest.

It is often difficult to accept how mistakes the older generations have made, difficult to speak about even but, on the first meeting of the book club, I remember a young man openly stating that our parents messed up so much. I have come to believe that the first step towards change is realizing that there needs to be change in the first place.

The book club felt like a safe haven, an Eagle Nest, a gathering of young intellectuals , a movement for change. Knowing what I do of Mark Anthony Obumneme Osuchukwu, I am expecting even more from this space. I am expecting these young people to upset the balance and shake the society. You’d agree with me that the situation of things in Nigeria calls for spaces like this one, like an Eagle Nest book club.

His radical nature is something to envy, such strength and sheer enthusiasm for change. I am hopeful that he would gradually effect change and someday inspire a movement of young intellectuals , especially of the Igbo communities as he is in fact a young man who believes that the Igbo people do not embrace their culture enough. Western culture has become the norm, the ‘cool’ thing. He believes that any young person who thinks they are too cool to recognize the culture and traditions of their people are ‘wereys’ as he puts it.

At the book club’s first meeting, people discussed Africaness and Igboness, young people talked about the Igbo culture and without the fear of sounding ‘uncool’. Makes me wonder what these people can achieve in a few months or years, they could bring back the Igbo spirit that our parents have taken away by failing to make us understand that home is always home.

He makes me smile, smile at now and the future, at what he can achieve with this space, at how much change our society will experience. He makes me happy to think about what the future holds for the book club and knowing him, he most likely will step on toes just to do what he knows to be right, for now and for the future.

PrevWe Do Not Know How to Grieve Until We Grieve” – Chinonso Nzeh
NextAvoid Creative Writing Classes and This Thing They Call MFA. -Obinna Udenwe
Prev
Next
you may also like