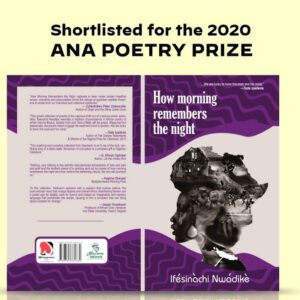 The inextricability of literature and reality is a standard which gives literary pieces varying degrees of quality. Grief, sorrow, regret, joy and happiness amongst others are fabrics or components which lace our memories. Ifesinachi Nwadike’s 33 poem collection titled How Morning Remembers the Nightbares relentlessly the colour and mien of memories as regard to the poet, and by extension his immediate society. Ushering us in with an introit which in my view, is a painting with words which gives us a nutshell of this literary master piece, more or less a foreshadow, Nwadike shows his proclivity for activism and concern for ones nation:

Grief of a comrade, in a hurry, No goodbyes…

Of activists, nationalists, patriots whose bloods, their nation’s root sprout in

Of  jungle justice… Of Ochanya, Leah and maidens plucked from the safety of home…. (11).

The first part, “A Deluge of Grief and Anguish”, comprises befitting tributes in which Nwadike underscores the collection’s titular tryst to Nigerians and by extension Africans who share in this pizza of memories ranging from grief and sorrowful moments down to the cluelessness and evident wickedness of supposed leaders and to an extent, distinctive experiences with cupid’s arrows. As usual with unique and classic literary pieces, it seems like engaging in Sisyphus’s plight when posed with the challenge of selecting poems that can be termed the best in the collection, be that as it may, “Bang! Bang! Bang!”, “In Blood Day Light”, “Death Came Calling in the Guise of Pleasure”, “Memory is a Crust of Blood”, “Purple is the Colour of Mourning”, “The gods Missed You So Much”, “Graffiti on a Rebel’s Remains” reflect life’s intricacies, man’s inhumanity, sheer wickedness, ignorance and how their fangs have injected into the memory of the society, a poisonous venom that keeps spreading like cancer.

The idiocy and hatred which stirred the 1967-1970 pogrom and unripe exit of legends such as Pius Adesanmi, Stella Adadevoh, Esiaba Irobi amongst others isn’t left out as it makes this part of the collection an emotional one, reawakening our memories to worthy souls and tragic happenstances that shouldn’t be forgotten in a hurry. “Denunded, Agwa sits supine” is yet another poem in this part which reflects a percentage of greater evil which religious fanaticism bequeathed to ignorant Africans by the white man whose double edged blade of ignorance and foolishness has rent the tiny thread holding our beliefs together hence things falling apart.

On the other hand, “De-Money-Crazy”, “House of Legislathieves”, “Vision Infinity”, “Who Says We are Corrupt”, “These Baptisms Notwithstanding” through the poet’s excellent satirical stance, lay bare the extreme level of greed, naivety, and negligence of our leaders from the onset, and how it has boomeranged by plundering our nation into the chasm of destruction and retrogression. Needless to mention that these supposed leaders take pride in their proclivity of exhibiting ignorance with finesse:

it is government of the Legislooters

By the Executhieves and for the

Milking the treasured breast of the

Peharps, in what I term a well crafted resolution, Nwadike’s collection ends with the third part tagged “Songbird” where we see a buxom of praises and encomiums written in respect of inspirators, role models and worthy recipients who despite their varying fields ranging from the fraternity of the pen, politics to the enclave of cupid’s essence, have distinguished themselves with astute uniqueness and excellence, hence of great significance to the poet. “On this Eve of Sprouting Madness” and “As Leak-Proof as the Scrotum” are clearly metaphorical poems in honour of distingushed literary giants cum role models whose greyish wisdom in the literary world has gone a long way in piloting the poet’s growth like the farmer to the yam tendrils, he praises these bards for their blunt roles in reeling him out from the chasm of naivety:

Of my curtained eyeballs

It now sees beyond the standpoint

By the oblong door

Be given the armour

“From a Limitless Smoldering” furthermore, praises Chimamanda Adichie’s unwavering inclination towards the deconstruction of the agelong societal practice of gender inequality while “They Feasted on A Minority” reawakens a memory that haunts all who played a role in its creation. Underscoring the assertion that the devil you know is better than the angel you don’t know, Nwadike simultaneously mourns and praises a former leader of this nation who is clearly a saint when placed side by side  his traducers this:

A Parliament of vultures

Gathered to feast on a minority

The hegemonic mob clobbered and left to die

A cacophony of hate and remedial greed

You left before dusk

Where you were forbidden to stay the night

Now they have realized

That the water needs not be clean

“Sweet Scent of citrus” solidifies the possibility of finding true love in this time of materialistic based relationships and heartbreaks as even the poet had his own fair share.

Nwadike’s use of figurative expressions, friendly diction, imageries, enjambments and transliteration obviously cuts him out as a seasoned bard whose pen dances not just to the informative drumbeats of literature but also to its informative persona. It is equally not false to assert that the average reader can resonate completely with not less than twenty poems in this collection, it is therefore not an overemphasis to imply that How Morning Remembers the Night recalled our memories almost dozing off upon the bed of history back to reality.

Iwuagwu Ikechukwu is an African poet, a graduate of English and Literary studies.  His poems won the Poetry Nook weekly contest and got an honourable mention respectively, which are now in the fifth volume paperback edition of the Poetry Nook anthology, available on amazon. His short story was awarded an honourable mention in the  IHRAF Creators of Justice award in New York – 2020 edition,  His works have been published in The Shallow Tales Review & Ka’edi Africa (Nigeria), About Place Journal & Flora Fiction (USA), Dissonance Magazine (UK) and Orange Blush Zine (Malaysia). A foodie and lover of the Igbo culture, amongst his hobbies are researching, writing, studying, reading of African literature as well as engaging in creative and thought provoking arguments.
Share this article:

PrevFantasy Beyond Boundaries: With Chio Zoe, Author, Memory of Stone.
NextHomecoming: A Stage Play in Nsukka
Prev
Next
you may also like