INTERVIEWEE: Brigitte Poirson, a former teacher and university lecturer in languages in France and England, has published seven books. A multiple award-winning poet, she has also been included in magazines and anthologies, and in “the Europe 500” and “Who’s Who in the World”. After managing and publishing the Via Grapevine poetry series in South Africa, she now promotes African literature as an editor. She offers poetry contests with WordsRhymes&Rhythm, the largest poetry platform in Nigeria and a publishing house. She occasionally organizes poetry workshops in France with a group of authors, “les Plumes Comtoises”.
INTERVIEWER: Darlington Chibueze Anuonye, a 2018 Cesar Edigo Serrano Foundation Ambassador of the Word for Nigeria, is the Director, Aba Creative Writing Workshop. He won the 2011 FECA Prize for Literature and was shortlisted in 2016 by the Ibadan Poetry Foundation for its inaugural mentoring and writing residency. Anuonye holds a degree in English Language Education from Imo State University and currently works as a temporary staff of the University of Benin, Benin City. His short fiction, memoirs and poems have appeared in Brittle Paper, Black Boy Review, Storried Magazine, Ovis Magazine, Praxis Magazine, Coal Magazine, etc.
***
Darlington: In Searching, we find. What were you searching for before you found poetry? Or was it poetry that found you?
Brigitte: Poetry found me when I started reading and writing at the age of four. Rhyming falls on very young ears like a mystic rain to sublime the daily routine. But African and Indian kids’ bedtime stories had enabled me to travel round the world. Poetry has kept chasing me round the earth, but I have never been able to catch its essence. It’s like an evanescent unicorn that flies away when you think you’re going to caress it, and the contours of its elusive body have to be redefined with every poet. I’ve chased it with my pen. I’ve chased it through the pens of others. I’m still chasing it. I once wrote, years ago, these final lines to one of my poems in French:
“And my last word was
it’s only my first” 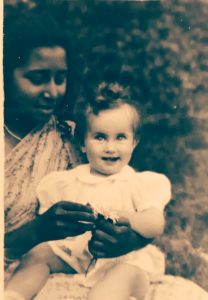 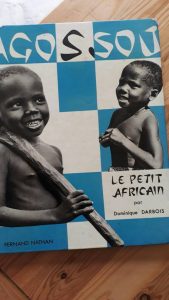 Then I read all kinds of books about African kids. My mum’s brother spent forty years in Dahomey/Benin and when he came over, he’d tell us stories about Africa. Then coincidentally I was asked to give talks about apartheid during my higher education time. I was preparing admission into one of those illustrious French schools. And later on, my students asked me no less than paying a visit to South Africa so I could bring them firsthand testimony of the situation down there. And so on and on. By the way, the tall handsome man on the photo was a cardinal. He was close to Pope John Paul II. 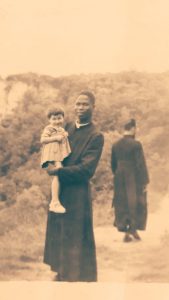 PrevBook Cover Analysis : Crocodile Girl
NextHow Nigerians are Bringing their Art Closer (Points to note)
Prev
Next
you may also like