You Can’t Get Rich Writing in Nigeria -Okey Anya 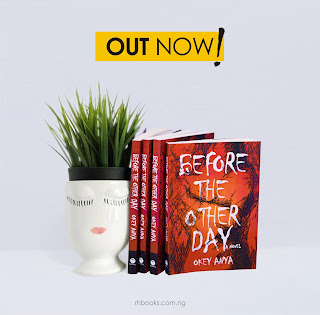 Can you tell us about your new book?

Before the Other Day is a fiction novel set in Lagos, Port Harcourt, Sydney (Australia) and a fictional Ukata village in Southeastern Nigeria.
It’s a book that shines light on major challenges women face in Africa, especially Nigeria.
It’s a story of a Nigerian woman of Igbo extraction and her struggle against a certain culture in Igboland. A culture that was put in place by some ignorant individuals to put her down and limit her from becoming all she wants to become.

What was the science behind your characters? How did you come up with them? Totally fictional? How did you select their names?

Some of my characters are totally fictional, and some are friends and people I’ve had the opportunity to interact with in the past.
There is also a little part of me in the book.

My protagonist is an Igbo young lady named Kosi (Kosisochukwu). I chose that name because I wanted a name with a direct connection with the part of Igbo I was writing about.
Before the Other Day is a book that has its root in Southeastern part of Nigeria, so you’re going to see a lot of Igbo names. You will also notice some other characters with Ikwerre, Yoruba, Hausa and English names, as the story moves from the Eastern part of Nigeria to the West.
I selected their names based on their locations.

What is the one big message you were trying to pass to your readers?
There are lots of issues I intend to address through that story and there are loads of truths I want my readers to discover as they read.
In the book, you will see how Kosi, who previously accepted everything life dished out to her, rose up one day, stood her ground and challenged a system that’s bigger than her.
DON’T JUST TAKE IT, that’s the message; ask questions and vehemently reject stuffs that don’t suit you well. Question everything!
A lot has changed, but unfortunately, some people still live in the past with no clear direction for the future because of the way some of us were raised, but I’m happy that is changing. We are beginning to have serious conversations about feminism and other topics that used to be a no go area in Africa.
I think it’s time we begin to question even some of our religious beliefs and some other things passed down to us by our parents and the society.
Don’t just bend down and eat the grass because your Pastor said it will make you the GOAT; ask him why he hasn’t eaten all the grasses in his village!

How was the publishing process for you? How long did it take in all?
Damn! I don’t even want to remember. Staying up from midnight till the early hours of the morning everyday for almost one year, and over three months of rewriting and working with a team to finally get the book out; that wasn’t fun.
It took almost two years to finally get it right.

I have read a lot of work from writers of African descent and I appreciate every one of them putting pen to paper to tell our story; my best African writers are Akwaeke Emezi and Chimamanda Ngozi Adichie. They work so very hard and they go extra mile to tell their stories.
Akwaeke still went ahead to block me on Twitter after a little disagreement tho. [Laughs out loud] But that’s another thing I love about her; she simply don’t give a f*ck!

Where is your favorite place to write?
I write anywhere I’m comfortable

Pen or Computer?
No pen. I have a Microsoft Word app on my phone and I write there whenever I’m inspired to write on the go.
I wrote most of my short stories on my cell phone.  I started writing “Before the Other Day” on my cell before the word count became too long and I moved to my computer.
No pen and paper at all, remember we are trying to save trees and our planet. [Smiles]

Have you ever had a tough criticism around your writing?
No. I guess the literary gatekeepers are still watching from their thrones.

Do you have a day job aside writing?
Yeah, I have a job. Someone said “you can’t get rich writing in Nigeria” and I agree.

Do you have anything you are working on at the moment?
Yes, I’m working on a new book; a big book. [Smiles]

How long can you finish a novel?
I don’t know, honestly. Writing is tricky; you just keep hitting the keyboard till you stop hearing that voice in your head.


When last were you at a party?
Sometime in July, and that was my sister’s birthday party. I stopped attending weddings few years ago for personal reasons, but I hope to resume after I get new clothes and shoes to show off to my friends. [Smiles]

Can you tell us what you are reading presently?
I’m reading two books I have read before; Wizard of the Crow by Ngugi Wa Thiong’o and Mario Puzo’s The Godfather.

What is your best social media network?
Twitter. Even witches and wizards know I never stay off Twitter. I live there!
[Laughter]

When last did you see a movie?
Last night. I’m addicted to Hollywood TV series. I just started seeing “Game of Thrones” again, while we wait for Season 8 coming next year.

Do you use Google at the middle of your writing, maybe to find out a thing or two?
Yeah, Google is everyone’s friend now. But, be very careful with the internet when you’re writing. That stuff can waste your whole day!
One minute you’re searching on Google, the next minute you get a Twitter notification and you’re off checking what’s trending.  It happens to me a lot.


What is your view on fashion?
I think comfort should always come first, when it comes to fashion.
I wear what makes me comfortable, and I don’t think dressing shabbily and wearing Ankara and Dashiki with long hair and untrimmed beards makes one a better African writer.

You can order Okey Anya’s book on www.rhbooks.com.ng. 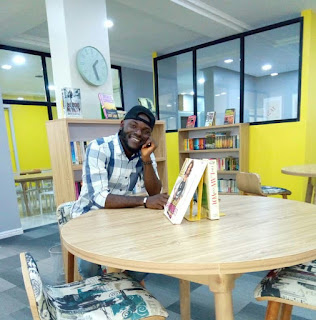