Congratulations on your second poetry collection. I have followed your work for years- and have seen you have really been very consistent with poetry in a way that it is appealing to the eyes. Why poetry? Did you find poetry or did poetry find you?

My first major entrance into the world of poetry was through my English literature classes in senior secondary school. Students in science classes had to choose between Geography and English literature, and I was one of the few science students who went for the latter.  We had to memorize and analyze poems like ‘Africa my Africa’ by David Diop, ‘The casualties’ by JP Clark, and a lot of other poems. Most of those poems were wonderful, but the pressure to look at them from an academic lens took some of the beauty out of their message. It was years later, when I stumbled on the poetry of Rumi, Mary Oliver, and Peter McWilliams that my heart was opened to a world where poetry was not a means to score an ‘A+’ but an avenue to express the joy and sorrows of existence.

Did your first collection lead you into writing the second one? This one? How did the first one go?

After my first poetry collection got published, I stopped writing for a while because I was plunged into the corporate world where I had to hustle from 9-5 (more like 7am to 8pm), and the last thing I wanted to do after spending hours in traffic was write poetry. I found a way out of this grind through freelancing, and a good number of the poems in the collection are a call for us to pause from the rat race and take a deep breath irrespective of where you are. A call to be kind to ourselves and to extend that kindness to the world. The most beautiful thing about my first collection is that I still get messages from people telling me how much they cherish the poems. To me, that’s everything.

How long did it take you to write AITMOS?

Not asking for spoilers, but what would be a perfect summary for AITMOS? Do you want to share with us?

Alive in the memory of stars is a celebration of the resilience of the human spirit, and a call to live a vivid and authentic life. It is for outsiders, people who love the sound of rain on a tin roof at 4am, and those who dream of a world where everyone has a seat at the table.

I also notice you are graciously proud of your independent publishing history. Is this a kind of protest against traditional publishing? Is there an attachment you found in Independent Publishing?

One cool thing about the world today is you could publish a book, produce an album, and create something powerful right in your bedroom. You don’t need anyone’s permission to create and share your gifts with the world. You can see the disruption this power shift is causing across different industries. I enjoy hearing stories of indie artists breaking into mainstream charts because their songs went viral on social media. I love discovering art I would not have found if the artist had not taken the leap to create something outside the traditional metrics. I waited for years for someone to open the gates for me until I realized the keys were not only in my hands, but the door was open all this time.  So, for me, being an indie author is a celebration of the possibilities that abound for creatives today. It’s a whole lot of work, but it’s so fulfilling!

I saw the titles of the poems in your new collection- and wanted to ask what you did with number 42?

Means ‘I love you’ in Arabic and it was born out of an experience I had in the UAE where a woman came into the lift I was in, and all she could say in English was ‘I love you.’ I thought that it was beautiful that ‘I love you’ was the only thing she could say or choose to say at that moment.

I see you play with language a lot in your chapters. Is this a style or an intentional advocacy for language freedom in poetry?

I think the job of creative writers is to play with language. We are meant to spin words into magic. One could simply say the sun is yellow, or you could make it magical by saying ‘the sun is the smile of God cast on a bow and flung into cerulean skies for you and I.’

There is a child inside all of us that can create that kind of magic, and also appreciate it when they see it.

What do you do aside from writing poetry? And where do you like to write? What does your writing process look like? Do you share drafts with friends? Do you belong to a writing community?

I’m working on a short story collection that will be released in early 2022. It’s titled ‘a backpack filled with sunsets.’ It features a lot of characters; A girl obsessed with Chinua Achebe, an angel visiting Lagos who almost gets kidnapped, a lesbian who makes a new friend in a park after going through a heartbreak, and a couple of other individuals.

I like to write in my room, but I’m open to writing anywhere. Once I have a story or poem idea, I have to write it on my phone notes. I tell myself, “Do not think you will remember it later, that’s a trap, write it down now!”

I do share my story drafts with a few friends, and yes, I belong to a few writing groups online.

Asides from writing, I’m a physical trainer, a business developer, and a soon-to-retire spy for the confederation of intergalactic mammals.

Who are the poets that motivate you? Who do you read more?

I love the poetry of Rumi, Peter Mcwilliams, Mary Oliver, Warsan Shire, and many others. I’m always reading – the Instagram bios of strangers, articles written on subjects I’m not familiar with, new books, old books, memes, the labels on jars of produce…. There are mysteries out there. I have to uncover them. 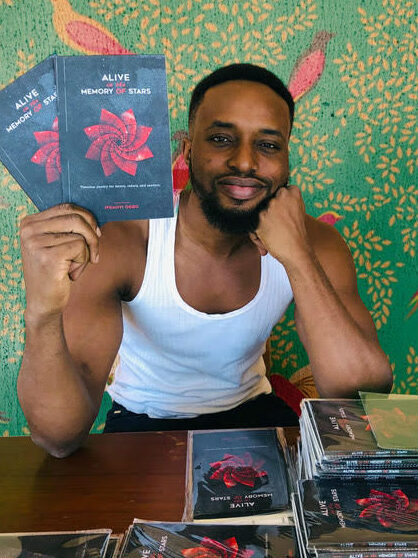 You can purchase book on AMAZON

PrevThe Story of Children’s Literature in Nigeria with Ayo Oyeku
NextWhen The Sky is Ready, The Stars Will Appear by E.C Osondu: A Review
Prev
Next
you may also like