Literature & Publishing in Nigeria is Not a Billion-Dollar Industry. Talking with Author U. A Daniel

U. A Daniel had written a book with an alluring back cover design. And you hardly get a title as this in the list of Nigeria novels. We were excited to get across to him for this brief interview. Please read and always, get back to us where possible. 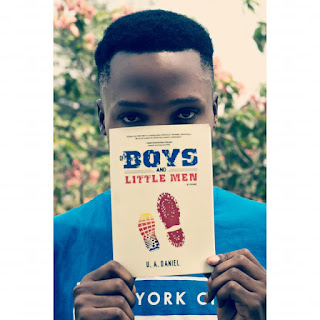 How long did it take you to write this book?
It took about a whole year. Or maybe less. I started writing it towards the end of 2016 into 2017. I abandoned it for a while to chase other things and then came back to finish it up. And by September of 2018, I had begun sending it out for editing.

It’s an interesting thing that you decided to write a story about boys, what are your
inspirations?
Boys of course will be my inspiration, but not exactly. I think my fascination for boarding school was the blueprint of my inspiration. I went to a boarding school for six years and a whole lot happened, so much so that long after I left every other thing was a reference to my time in the dormitory. I was bound to write about it.
How did you publish? How was the process? Did you struggle with your editor?
Publishing was a bit shaky. I actually wanted to make it an e-book. I mean, it was easier that way, but I hungered for the imagination of having it in print. You know, having it in hard copy even if it was going to be just a few copies. And so, I searched for some self-publishing deals around and found Swift Publishers online with a good deal and I took it and made it happen.
The process was a bit tedious, from selecting book covers to editing, to formatting. But there wasn’t so much stress, it was just about deciding what stays and what goes. It was as if the more you fixed, the more damage you made and It was beginning to get frustrating. Time was going and I just wanted the damn book out. I just feel the work comes from writing and editing, every other thing is just a simple yes or no decision. I guess.
Yes. It is a full or an almost full part of my time in the boarding school. But it is all fiction, deducted from true experiences.
My best writers? Truth is, I don’t think I can say I have best writers. I’m mostly into the works. Like, into the books. I know some writers that I loved and disliked some of their works. It’s really hard to say. Maybe I will have to read more. But out of my head, I loved Caleb Somtochukwu Okereke, he is a Facebook friend who writes. I love how he writes, and he is pretty young too, and he is a lot of things, a journalist and a speaker. Then there are a few up and coming writers I have on social media who share their works, I know an Okegbe Ezekiel. I guess because I know them to an extent. For the very popular ones I can go for their works because I can’t say I like them, I don’t know them but I loved the Night Dancer, I loved Season of Crimson Blossom, I love Half of a yellow sun, I love Chimamanda and Elnathan only mostly because of their outspokenness and what they stand for and they are good too. Hopefully I may like them in person when I meet them. I really hope I just made sense.
So far, it’s nice. Thank god. I only had out a few copies released and so far it’s been good. Encouraging. Of course, there are things I could have done differently but, I appreciate the thumbs up. It is a well written piece. In fact, it’s good and brilliant. Getting more praises for the twist and ending. I think people like the fact that the book went from just your regular drama to a horror fantasy. I try for that part. Lol.
What are your concerns around literature and publishing in Nigeria?
My concern around literature and publishing in Nigeria is that it is not a billion-dollar industry. Lol. OK. Seriously, I don’t exactly have so much concern. I feel it is a progressive one and I know a lot of publishers are emerging and everyone is trying to make it a big one. I just wished there were more diverse markets on specific genre of stories especially stories that do not always have to preach. Honestly, I realized a lot of books by Nigerians always have something to preach about. It is as though your book would not sell if it is not fighting against something ill about the society. There must be a message of some sort. Heaven know how many western books I have read that had literally no message, but were good books regardless and it sold too. I just wish our publishers would look else where for something fresh. I feel pressured to fight against something in my book. I know our society has a lot going on, but isn’t fiction suppose to be an escape? Instead it is a reminder, which is not a bad thing but then, it gets really old.
Do you have anything you are working on currently?
I am currently working on a novel. About a guy who comes out from prison into a whole different world from the one he left behind. It’s almost done. And by almost, I mean not close at all. I am also working on a YouTube channel for a vlog series where we get to have conversation over things that may concern us.
Any final words to all the writers and readers that will read this interview?
Please write. Write honestly, write genuinely, find your voice and don’t be pressured by the publishing tradition to write what isn’t you. And don’t just write, share. Share!! A writer must be read to be called a writer so don’t write and keep. Share.
Share this article:

PrevThe Cover of Bura Bari Nwilo’s “THE COLOR OF A THING BELIEVED”
NextDalu’s Diary by Ogechi Ezeji : Children’s Literature in Nigeria is Coming Back
Prev
Next
you may also like