FIVE FEMALE YOUNG NIGERIAN WRITERS THAT WILL SURPRISE YOU IN THE NEXTFIVE YEARS. 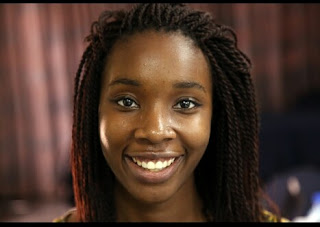 joku is a junior at St. John’s College, Santa Fe, where she studies French, Mathematics, and Laboratory Science. Besides writing, she sculpts, paints, and does freelance editing and translating work. She is the 2015 recipient of the Awele Creative Trust Award and an alumnus of the 2016 Farafina Trust Creative Writing Workshop. In 2013, she won a Writing for Peace Young Writers Prize and was a semi-finalist for the Golden Baobab Prize. Her writing has appeared in Transition Magazine, The Kalahari Review, and the Kerber Verlag anthology, African Futures. She is currently working on a collection of short stories centred on middle-class Nigerian life.

She loves to put down words for every thought. She believes writing is a tool for growth and that truly as the saying goes “the pen is mightier than the sword”.

She pours most of her thoughts as words in a space in the web at www.maureenalikor.com

Chisom Okwara
(3) Chisom Okwara is an eighteen year old Nigerian girl who is Aba first, and Igbo second. She loves to sing and sleep and watch musical reality shows. She regards herself as a weirdo and an introverted one at that. She cracks lame jokes for a living and drinks music for a believing. She hates to want to write, although she laments that she’s found herself in the cave of that clause, for the past couple of months. She has found her short write-ups on Words are Work, African writer, Praxis magazine(thanks to AMAB books’ 2015 writing contest)  and Teen ink magazine. She’s not a big fan of shoes and the last time she wore a beautiful sky blue evening gown, she wore her sandals underneath(…and so? Well, welcome to her world!)

She lives on daily bouts of warfare, victories and defeats with her insecurities and anxieties. She is an FBW( Facebookworm), which means somehow, she eats her newsfeed and then sleeps on its crumbs. She wishes to perfect her pidgin and French-speaking skills. She studies in Mauritius and lives in Naijitius at the moment.

And yes, she has watched two episodes of Game of Thrones.

A poet, writer, and lover of words. She enjoys short story writing and this led to her running a literary marathon tagged Writeathon very early in 2015 with a fellow literature lover using Facebook as a platform.

Her writing is less than two years old, but her love for literature has a long history. Though unpublished, she has quite a number of poems to her credit and was the winner of the first edition of the Asaplanet poetry prize.

She is a lover of  photography and handles the camera quite well. Nature and landscapes are her attractions. Her love for good music and lyrics.

She started writing in 2014 after she lost her passion for singing to fear and discouragement and has since written many unpublished articles, short stories and poems, and a number of songs.
She’s a co-founder of the Bleeding Pen Literary Society(BPLS).
She resides in Owerri, Nigeria.